Energy conversion and storage devices are fundamental to our daily life and industry, and also play a key role in achieving a low-carbon society by improving the efficiency of energy use. Improvement of device performance and realization of new devices depend on the development of new materials with excellent energy conversion and storage properties. We mainly focus on solid-state ionics materials used in energy storage batteries such as lithium-ion batteries and all-solid-state batteries and are engaged in the search for new materials based on multi-scale spatial control. 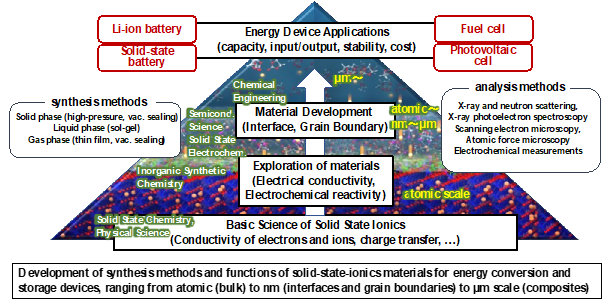 Lithium-ion batteries operate through an electrochemical reaction in which lithium ions reversibly move between the positive and negative electrodes. Lithium-ion batteries are the most widespread type of rechargeable battery because of their excellent energy density and charge/discharge efficiency. The importance of materials research for performance improvement is increasing. The reaction field of lithium-ion batteries is very complicate, and it is important to study the materials to actually utilize the electronic and ionic conductivity found in the material search. Especially, as the electrochemical reaction initiates at the electrode/electrolyte interface on a scale of several nanometers, the interfacial structures and side reactions at the interface affect the battery performance. Furthermore, the chemical composition and structure change spatially and temporally with the reaction. We have investigated ionic conductive materials for modifying the electrode surface. It is possible to control the crystal structure of the electrode surface formed during charging and discharging and the structure of the modified surface, thereby improving the input/output and stability.

Development of materials for all-solid-state batteries

All-solid-state batteries, which use inorganic solid electrolytes instead of flammable organic electrolytes, have been attracting attention as a candidate for next-generation batteries with superior reliability than lithium-ion batteries. The biggest challenge for all-solid-state batteries has been to improve the ionic conductivity of the solid electrolyte. In 2011, we reported a superionic conductor Li10GeP2S12 in which lithium ions move around like a liquid. Once battery operation became feasible, new issues such as morphological change during cycling and atmospheric stability became apparent. In order to address these problems, it is necessary to improve macroscopic conductivity and stability by developing compositional structures on the nm to µm scale, in parallel with material search (atomic-scale structure control). There have been no electrochemical devices that utilize the interface between solids, and it is not clear how the exchange and transfer of ions and electrons occur. We are working on the development of the materials and basic theories.

Analysis of phenomena at electrochemical interfaces

In order to obtain clues to the development of new materials, it is necessary to elucidate the mechanisms of electrochemical reactions. We have constructed an atomically controlled model interface by thin-film synthesis and directly observed the interfacial structures in the battery reaction field using state-of-the-art physicochemical techniques. Specifically, we fabricated model interfaces using an epitaxial film electrode with a single orientation on a single-crystal substrate, and the interfacial structures are directly observed by synchrotron X-ray surface diffraction, neutron reflectivity, and hard X-ray photoelectron spectroscopy, which can clarify the interfacial structures buried in the µm-scale battery material. The interfacial structures change to a different one from that inside the material in the early stage of the battery reaction. Our research is aimed at improving our understanding of battery interface phenomena, such as lithium ion diffusion, electrode material dissolution, and electrolyte decomposition, and providing feedback for materials development. In recent years, we have expanded our research to the analysis of interface phenomena in all-solid-state batteries, and we are also working on the analysis of these phenomena using vacuum systems (electron microscopes, atomic force microscopes, etc.), which are unique to solid-state systems.

Photoionics is an academic field that deals with the phenomenon of ion migration in solids by light irradiation. It is expected to be applied to small and eco-powered storage batteries that can be directly recharged by light energy. However, there has been a problem of degradation due to photo-induced decomposition of liquid electrolytes, and the reactions have not yet been understood. We have succeeded in solving the problem by constructing an all-solid-state photoionics device using solid electrolyte, and have demonstrated lithium desertion (photo-charging) by light irradiation. Based on these results, we are now working on the verification of the principle of photoionics phenomena and the development of advanced functions and materials. This is one of the research themes that we are focusing on as a new development of electrochemical devices utilizing the solid/solid interface.